Legends meet but no wind at the Soling North Americans updated

Legends meet but no wind at the Soling North Americans updated 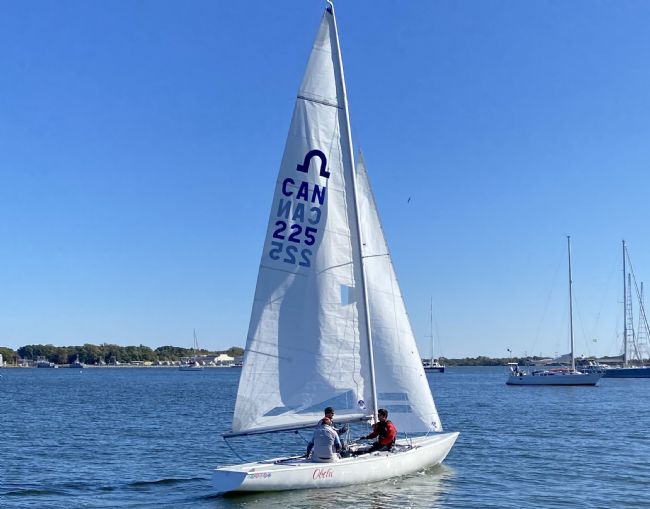 Once more Greg Cukor the race officer had to abandon the day in Annapolis, as no wind despite a great sun and pleasant fall day at the Cheasapeak bay.
A shame considering the distances traveled by many competitors coming from Halifax, Nova Scotia, Milwaukee, Germany and Austria, also the first time two ladies are helming at the event.

Amazingly at this event two legends collide and starts to remember the past, Ed Trevelyan and Peter Hall, both Soling sailors since the 80', both Olympic campaigners, World champions and even gold medalists.

They particularly remembered the World Championship held at Visby in Sweden during summer 1979, which Robbie Heines, Ed Trevelyan and Rod Davis won and Peter Hall, sailing with Dennis Toess and Phillip Kerrigan finished 5th but could have won the event if a light wind race which he was leading but was abandoned… and event in a country where alcohol was prohibited but all sailors managed to get drank…
At this world championship after too many general recalls for a race the race officer together with the sailors decided to have rabbit starts and where Buddy Melges an specialist at the starts was not happy about.

From these memories both sailors still had their trophies a stone with at 3d Soling mounted.
Results 1979 Sweden Worlds


The Severn Sailing Association welcomed all sailors for a dinner at the club where many sailors had the task to tell some stories at the Soling class, amongs the best: it was Karin's … while sailing against the hot shots, by starting late more than a minute after the fleet found herself going to the right alone while the entire fleet to the left, after a while a big right shift puts she in the lead to finally arrive first at the windward mark, but she did not have a clue about which course was set and had to keep doing circles until the first two boats arrived and rounded the mark Hans Fogh and Buddy Melges…so she starts to follow them and see one team dropping the main and the other hoisting the shute… without understanding what was going on finally she realized that at some point that right shift became a squall coming direct into the race course, Buddy's crew saw it and dropped the main, but Hans kept hoisting the spinnaker and sailing down the course trying to go down as max as possible as requested by the crew, until he realizes the crew was desperate requesting the spinnaker should go down, finally all teams drop their sails.

Sunday will start early but the time limit is at 1400hs, the forecast looks better and possibly three races could be sailed.

The forecast nailed in full predicting a sunny but not able to sail since the wind would not cooperate, the race officer Greg Cukor at 1300hs decided then to call off for the day which allowed some teams to drive up to Washington DC and others to keep working at their boats.

This Saturday the forecast is similar, but with a slightly chance for an afternoon breeze, which would potentially allow at least one race in what is called shitty winds, this for a sailing boat equipment that can race easily up to 30 knots of wind providing an excitement only seen at small surfing/planning dinghies but requiring power from the team like weight lifting athletes and a coordination amongst the team members only seen at the best collective sports.

The Severn Sailing Association and its volunteers have done a great job welcoming the various international sailors sailing at the event and today an official dinner will be held in the afternoon, hopefully hosting exhausted sailors after a day in the water.

Despite temperature isn't enough to declare champagne sailing, the Southwest wind that built up over the day also generated the nice swell for the typical Soling surf.
Due to the great wind announced the entire fleet accepted the proposal from the Race Committee to only make 4 legs on each race including a mini reach but to race three races instead two announced.

The wind started with 10 to 14 knots at first race, USA 853 Collins, Duley and Keast rounded first and did a great downwind taking some distance from the fleet, but like the followers chose the left mark to then go up on the right tack, boats behind rounding the right mark and then going left initially made significant gains, that way USA 845 with Baum, Muller and Lennie took the lead to win the race!! CAN 225 with Hall, Bailey and Pacarar finished second and in third it came GER 11 with Dietzel, Zeileis and Ramoser .

The second wind the wint went up and left, CAN 225 sailed a great race taking the bullet and GER 11 followed , the boys from Halifax CAN 236 with Halliburton, Booth and Westfall finished third.

The wind kept increasing now close to the 20knots some times, CAN 233 from Port Stanley, CA sailed by Freeman, Veldstra and Donker sailed fast using their crew weight, in second came the consistent Milwaukee team USA 845 and in third GER 11 that like USA 853 had sailed exchanging halyards (jib/spinnaker) after the lines broke.

The teams were received with Oysters, a nice weather and hopefully better temperatures for tomorrow. 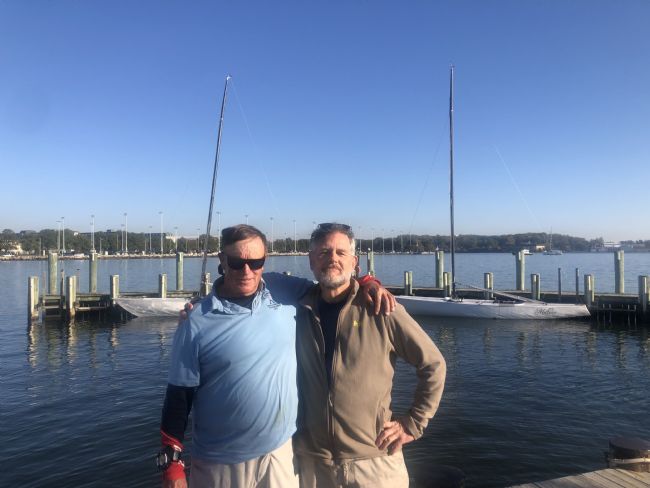