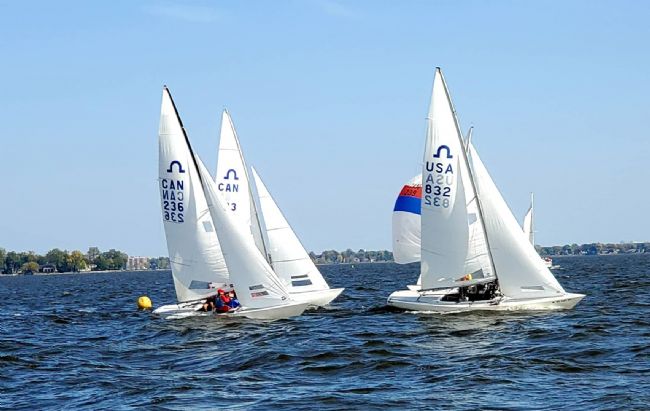 No Canadian Championship for 2022, Fiona's Hurricane smashed the power network around Halifax and the one was not fixed in time to make it available the crane at the Royal Nova Scotia Yacht Squadron , therefore the Solings could not get into the water and go out for some exciting races on Sunday.
However the club made available to all Soling teams local boats who survived the storm the day before for some informal racing during Sunday, who had nice and shifty winds and teams at least had some fun despite the impossibility to contest the Canadian Trophy.
This was the third event not held over 2022 due to weather conditions, the first was the Worlds in Chiemsee with no wind over 6 days, the same happened to Raubritter Pokal in Berlin at the same weekend of the Canadians .
We hope better conditions for the final races of the year, the North Americans to be held in Annapolis end of October (North American Championship, at the same month the Dino Schiesaro in Torbole, the Argentine Championship in November, and the Dutch Championship in December.


**** Saturday news *****
Being hosted at Royal Nova Scotia Yacht Squadron (RNSYS) in Halifax and carefully organized by team CAN 236 (Terry Booth and Bill Haliburton) the amazing turn out of 14 teams were lucky that nowadays the weather forecast warnings and predictions are quite accurate.

The event planned to be held over the weekend feel apart when Fiona's edges were marked over the venue, rain (flood), wind and waves, all in one that first made team CAN 227 leaded by Tom Mitchell to postpone to Sunday their so expected night gathering at the seashore. The it became for team USA 852 with Henry Thomas packing the boat on Thursday and heading out of the zone, concerned of infrastructure collapse. Canadian class president Gord Devries worked hard with other owners to unmount boats that were ready and secure them in higher zones to avoid the flooding and falling trees, So far the only lucky sailors were the ones from the sailing training school who earlier in the week had an intense coaching by the overseas visitor GER 1 Roman Koch, they had lots of wind, sun and perfect conditions, also some minor brakes to fix, showing how important maintenance is, the boats in great condition just can handle .

Now Fiona is gone, but power is off and should come back, the race director Luke Porter will announce earlier Sunday, if some races can be held during this day as it was initially planned, It all will depend on the power at the yacht club, only way to crane in the boats into the water.

This became a waiting game for most of the teams, in special to those who have travelled long distances USA 832 with Ashley Henderson, coming all the way from Milwaukee, hopefully it works out and the fleet can race some races in the Northern Atlantic and then enjoy a nice Dinner at Tom's place.