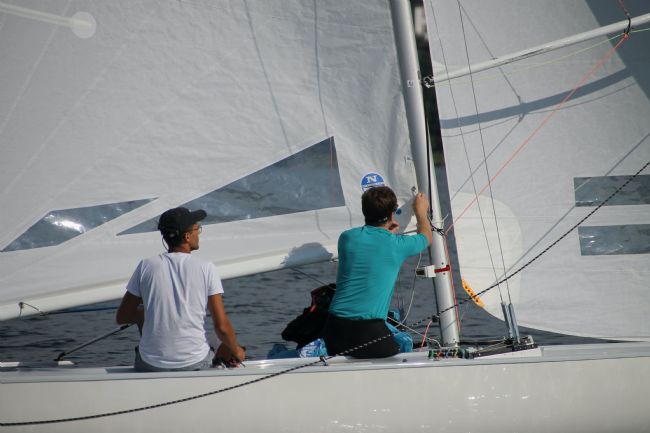 Starnberg like no other time provided an amazing sailing condition to the 13 teams attending the traditional Bavarian event hosted by the Bayerische Yacht Club.
The first day with the typical conditions fluky winds, holes, patchy and shifts driving crazy the teams in which the race officer Eberhard Fischer-Brandies pull out three races from his sleeve, like a magician. A day that the winning team had two bullets but also an eleven, it was the perfect day for the Berliner team GER 323 leaded by Matthias Dulce with two fourths and a bullet that left him the day with a sweet taste at with the yellow band followed by GER 2.

The second day saw amazing sailing conditions with winds at the 20+ knots range a tuff condition for those sailing only by two and also to the new Liebner Soling that still are adjusting bolts, and checking the boat. They were leading when decided to abandon to do a complete revision at the shroud attachments, good decision, some nuts were not fastened…

The day clearly was owned by the young team GER 2 with a 4th but three firsts and not far behind it came the windsniffer local hero GER 308 with Karl Haist, Martin Zeileis and Irene Haist, they got a bullet, two seconds and a third, enough to catapult them from the bottom of the overall results into second place at the event.

GER 311 with Bjorn Geisler, Marcel Barie and Philipp Behrendt the guys from Edersee kept their average obtaining a second, two 3rds and a 4th enough to keep them in third position.

It was a great test for the new Soling under the leadership of class President Michael Dietzel, who was really happy with the mast, and did not get use with the new layout. This now leaves the class with three producers of Masts in Europe – two of Carbon ( the Dutch company carbonmast.com , the German company: CUL-masten and the Aluminium producer Licospars in Italy.)

While finishing this report, another great event is bein raced at the Atlantic Ocean, YCLB, France, something for a later report today or tomorrow with great attendance.

Next event for the class will be the Norwegian Championship and Linge's memorial with already 16 entries, and then the Zipfer Trophy in Austria before the Europeans with 30+ entries already. A good season end for 2022.