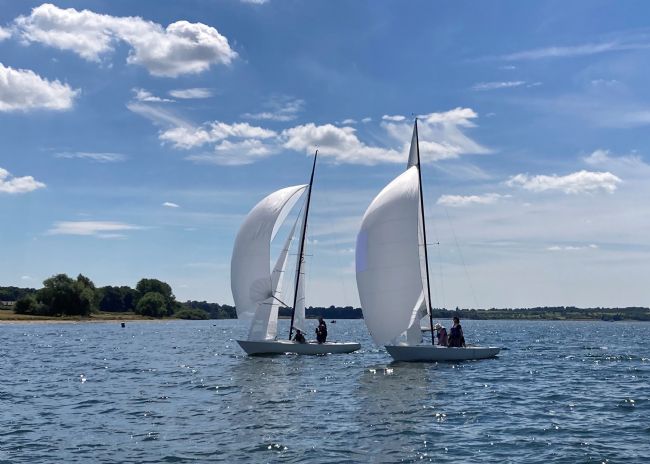 The light winds at Rutland

Because the small number of Solings this year, four boats, the HUNTER Formula 1 fleet at Rutland Water offered to join the Solings to make it to make it a larger/more viable event which was much appreciated. The UK's Soling and Formula 1 fleets have paired up before very successfully.
Of the four Solings that assembled for the 2022 British Championship, one boat was local (IRL3), two boats (GBR155 and GBR144) were from Blackpool and Fleetwood Yacht Club on the northwest coast of England and one from was from Lochaber Yacht Club in Scotland (GBR161). Victoria Kimber amidships on GBR161 was the only woman competing in the event. We would very much like to see more women participating.
In general the wind conditions were light, well under 10 knots most of the time, however not as light as Gary Richardson (GBR155) and Andy Riches (GBR144) experienced when they travelled to the World Championship in Germany earlier in the year when there was no racing! That was very unfortunate as it was the first time in many years that British boats travelled to Europe for a ISA championship.
The Race Officer, Ian Sumner, had a very difficult job trying to find enough consistent wind to get each race started. Mark Webb the mark layer was kept busy! In appreciation the race officer was presented with a bottle of Single Malt Scotch from the Isle of Skye and the mark layer with a bottle of JAMESONS Irish whiskey.
GBR161 Loudon/Kimber/Dean and GBR155 Richardson/Sloane/Ryan were quick out of the gate sailing to an imaginary windward mark about half a mile beyond the actual windward mark, sailing back to the correct mark once they saw the spinnakers being raised behind them! They then set about the futile chase down of GBR144 Riches/Seddon/Dinnie and IRL3 Tully/Ironside/Larkin. In the process of the chase down GBR155 missed a mark of the course (normal behaviour!). GBR144 went on to win the first race from IRL3 in second place, GBR161 in third and a DSQ for GBR155. The guys on GBR155 then sharpened up their navigation skills and won the remaining 2 races of the day. IRL3 retired from the last race due to their forestay hopping out of the hound on the mast during the second downwind leg.
Four races were held on the Saturday in light wind speeds of 4 to 8 knots. All four were won by GBR155. GBR161 was the best of the rest for the day despite having a problem with their jib sheet mechanism to contend with, leaving them in second place by a single point at the end of the day's racing.
Sunday brought even less wind than Saturday, with the race officer struggling to set a course and get a race started. One race, out of the two scheduled, was eventually completed. GBR155 was first securing the championship win, followed by GBR144 in second place, second place overall.
This was a lower turn out than in recent years, but we are hopeful that next year we will see more Solings competing. There is the possibility of several boats changing hands and returning to racing and the event will benefit from the larger fleet based at Lochaber Yacht club at Fort William, Scotland where the Championship will be held in early September 2023. 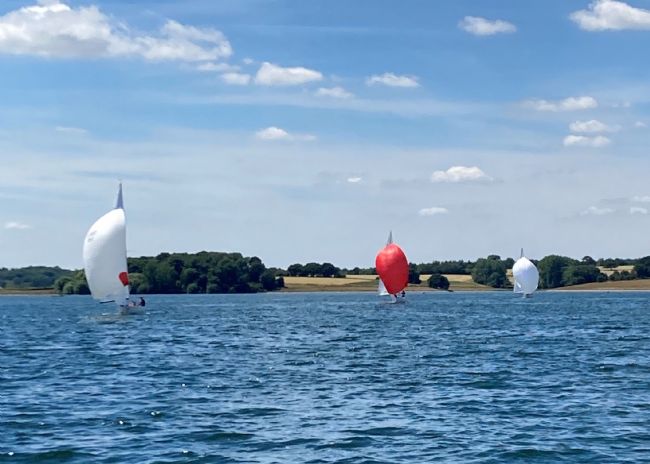 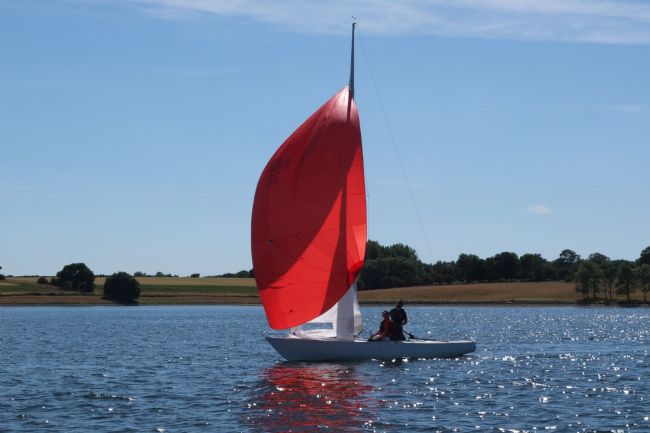