The old school wins at the Austrian Championship

The old school wins at the Austrian Championship 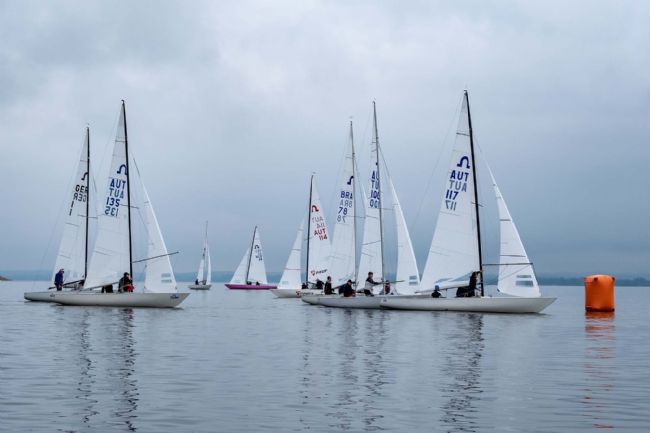 AUT 117 at Chiemsee, training the no wind race
@ Dirk Salmon

AUT 117 with Michael Farthofer, Rudolf Matheis and Michael Oberwager sailed a brilliant last day at the Wolfgangsee with only 10 knots of wind maybe less, achieving two seconds to jump from third overall to the victory at the 2022 Austrian Championship which had a great turn out, like the Spanish Championship held the same weekend but some thousands of kms away.
A well known name in Austria Farthofer past Soling European Champion in 1981 using his former OE 73 but now owning former Carl Auteried's boat AUT 117 a self gift to be able to sail and compete time to time with his daughter Lisa an Olimpian contender at the 49erFX.

The team managed to beat by just one point the Austrian team of the past seasons AUT 7 with Florian Felzmann, Stephan Beurle and Michael Felzmann and the young OIympic stars sailing AUT 124 Tomas Zajac, Philippe Boustani and Anna Boustani no matter the bronze medal obtained in Rio at the Nacra by Tomas.

The old school experience prevailed to the young energy and even to the actual great path Florian has obtained as he qualifies as almost young in the class...

The Union Yacht Club Wolfgangsee had beer for the participants and a nice dinner at the club casino this Sunday and closed this event with 7 races which probably gave a great training platform for all the Austrians, they have in their hands the possibility to make history by attending the 2022 European Championship at the next door lake Attersee celebrating the 60th anniversary of the Segel Klub Kammersee – more info found at www.solingeuropeans.com

The next event in Austria a local event being held at the SCK, the Auteried Pokal, next week or/ and in two weeks the German Championship being held in Edersee.

The summer activity warm up in great shape for the class.