Like on Friday the race committee accomplished the scheduled races so far for the event, validating the one and including a discard after finishing the 4th race this Saturday, now with a total of 6 and more racing tomorrow.

Including the discard ESP 34 with Jaime Alonso Allende, Juan Pablo de Diego and Julio Soria leads the event but in a tie with ESP 146 sailed by Mikel Alvarez, Claudio Montalban and Eduardo Olmos team that have been super regular during the series so far.

ESP 26 with Manuel de Tomas, Vitor Soto and Diego Fructuoso are thirds after a great last race achieving a bullet, the immediate follower only two points behind ESP 14 Alfonso Colon de Carvajal, Jorge de la Nuez and Manuel Allo who also collected their bullet at the third race of the day.

The wind have behaved as the forecast and like on Friday it allowed to complete all races in about 55 min.

The fleet is happy since all scheduled races have been completed with wind and without any incident except some over early starters who managed to re start. Only one General recall was necessary so far.

Tomorrow's wind forecast is not favorable, the direction and condition make the fleet think that the wind speed will decrease, but all 15 teams are ready to race again and even more after the great dinner being held at the Real Club Nautico de Madrid. 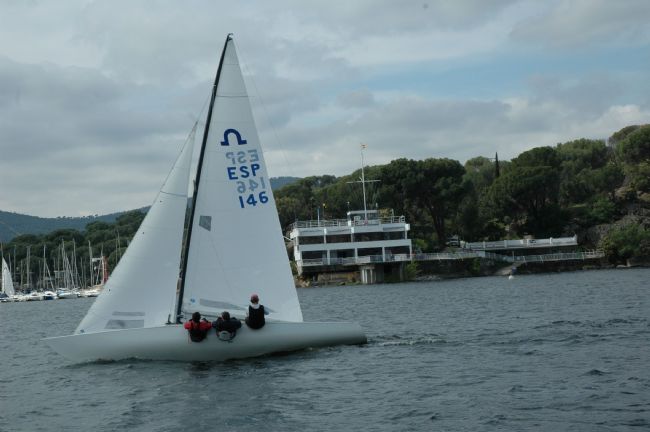