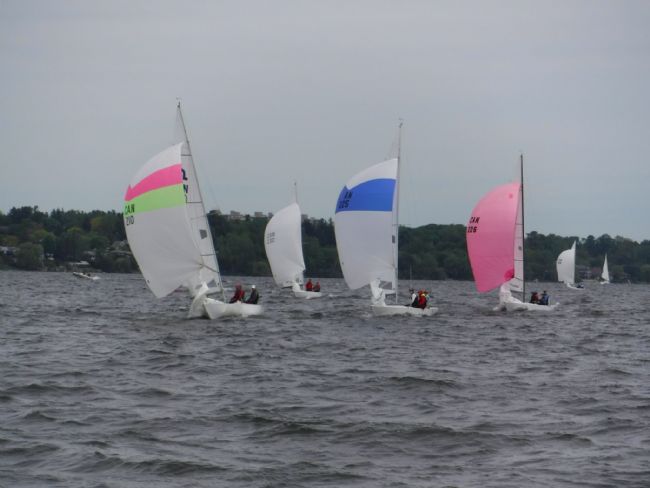 The fleet at the 2019 NA Championship in Canada
@Ellen Devries

50 Years Olympic Games anniversary, just released the event information details.
The Organizing Authority - Kiel Yach Club will use manage2sail platform, the same recently used at the 2022 Worlds.
The Dutch fleet that just made 800 Km. both ways to Chiemsee are already looking forward for an event at the Sea, before the Europeans 2022 of the class that will have its launch at the end of this week where about 50 boats are expected most that recently have returned frustrated to their homes after 6 days waiting for the wind, only one start that barely achieved the windward mark time limit but then it was abandoned.

1972 was the first Olympic year for the Soling class, Buddy Melges with William Bendsten and William Allen from USA was the first winner . The Olympic times for the class remained until 2000 when the class sailed their last participation in an olympic game with the most difficult medal to win in sailing combining fleet racing and match racing in front of the Opera house in Sydney, it was one of the most successful sailing events, covered by the TV, probably one of the first to set standards of media coverage for the future of sailing.

You will find the necessary information for the 50's OOGG anniversary at the following link:
https://manage2sail.com/en-US/event/50jahreolympiakiel?#!/

We hope Soling class sailors realize the importance to advertise the one amongst the other classes in a fantastic venue that promises wind for most days and some waves. A perfect training before the Europeans to be held in Austria at the SCK.

More information also can be obtained by writing to regatta@kyc.de
Yacht Club website: www.kyc.de
or at Facebook page: www.facebook.com/KielerYachtClub