No Argentine champion in 2021

No Argentine champion in 2021 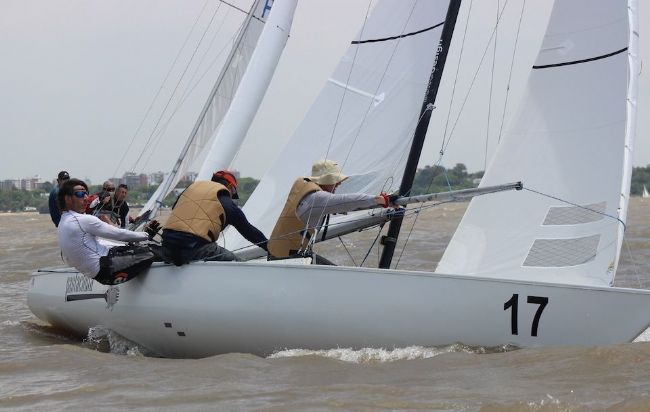 The event organized by the YCO (Yacht Club Olivos), started in great shape with three races held in superb winds from 14 to 17 knots a sunny day, high waters.
But on Sunday everything conspired against the championship, a real heavy rainstorm, with changing winds in intensity and direction prevented even to finish the only one race started.
Due to local federation regulations an Argentine champion is only declared with 5 or more races, which unfortunately were not accomplished.

The winner at the event took two of the three available bullets during past Saturday the first and third race, and were seconds at race no2, they were ARG 32 with Gustavo Warburg, Maximo Feldtmann and Diego Weppler .
The second place had two seconds, at the first and last race and a fourth in the second race and was ARG 37 with Alejandro Chometowski, Hector Longarela and Hugo Longarela.
ARG 34 with Diego Cappagli, Alejandro Moore and Javier Padilla sailed well but a boom out-hall failure left them with a DNF on the first race, and to compensate a bullet on the second and a third on the last race of the day (maybe because one less adjustment to make while sailing as the out-hall was fixed?

The Argentine Soling Class announced the South American Championship to be held next Easter in 2022 starting on April 14 and having Sunday April 17 as travel day back.