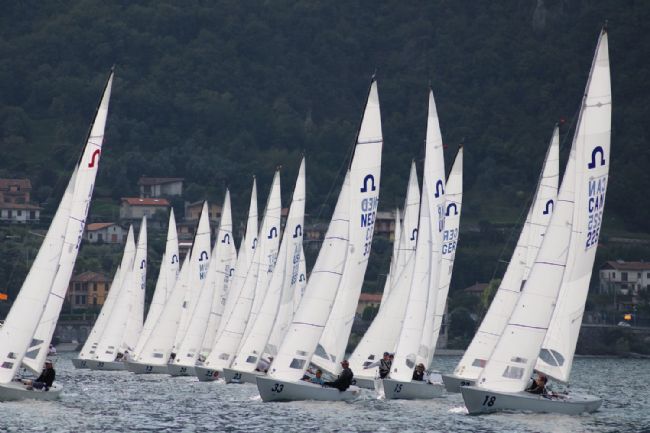 During the start - ITA 252 over early

At 1030 all boats were in the water but the wind was abscent from the lake, around 1430 the race committee decided to give a try in a real soft and patchy breeze coming from the South. The start that had only one over early boat had the fleet devided in two packs the ones trying the left side of the lake and those who went to the right, a few around the middle always looking for some air.

On the first beat, on the right side GER 331 with Scherer, Meissner and Stalhofer took the lead by a nice margin, close by FRA 164 with Gombeaud, Hinfray and Lefevre , the wind reading was quite difficult, but with the Monday news in your hands it is clear that the middle was not the best path to race neither the downwinds neither the upwinds…

At the second upwind ITA 259 with B. Maffezoli, P. Maffezoli and M. Maffezoli together with ITA 241 Puthod, Armellini, Kostner coming from the left made the move and got into the leading battle against GER 331 and FRA 164. The positions kept changing and at the end ITA 259 took the only bullet of the day, followed by GER 331 and ITA 241, FRA 164 ended loosing a few more places to two great comebacks from CAN 225 with Hall, Zeileis and Hall and NED 33 with Den Outer, de Lange and Souli who at the first beat were far behind and kept improving their positions leg after leg to finish 4th and 5th ahead of the French team.

It was only one race in really difficult conditions, not the best but the wind conditions for the week are not promising and one race in is always a relief for the organizers.

After the races, despite many issues with the internet connection, reason results were not ready quick and also this reports only comes in the morning, sailors had their first meal offered by the club a typical dish from the region called: Pizzoccheri a mix of cheese ham, potatoes and some wine (red and white frizzante) 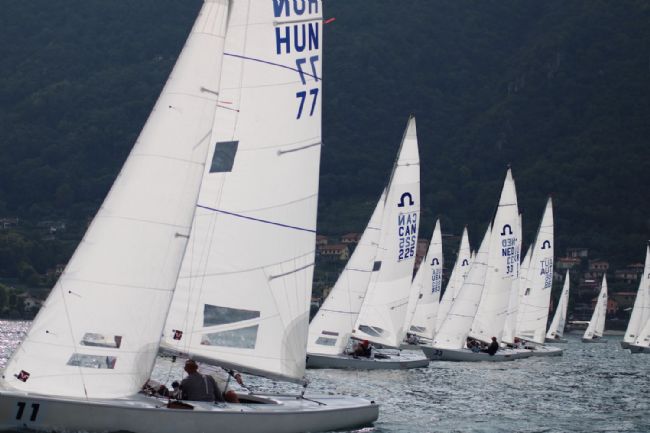