Great winds at the 2021 German Open and Raubrite Pokal

Great winds at the 2021 German Open and Raubrite Pokal 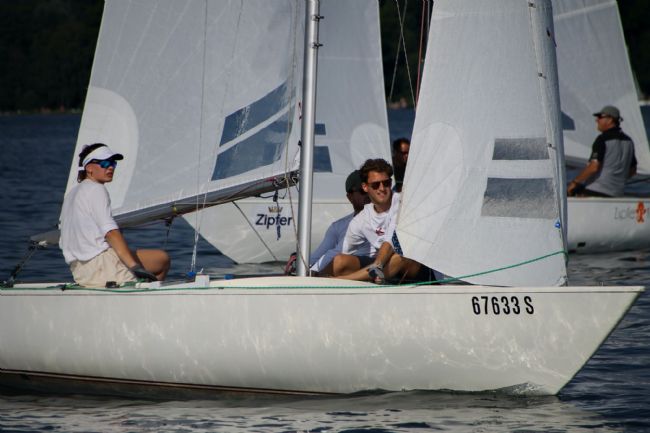 The young team from Berlin Fredericka, Nicklas and Leander

With the low pressure moving East at Northern Germany, the tale of the really high winds were gentle touching the Wannsee lake in Berlin, the VSaW a traditional Yacht Club is the 2021 host for the German Open delayed first in 2020 and then earlier year where it was scheduled at the Chiemsee, a mess in the calendar all due to covid.
The Wannsee lake more than a lake is a bay inside the Ravel river that later it divides into the Spree river that goes through Berlin town. A series of different “lakes” within the river makes the region unique, therefore Berlin to be considered one of the capitals with more rivers, channels and lakes surrounding the one.

But back to the sailing, three races windward / leeward with three laps were managed yesterday by the RO, which started first the Soling class and then the Dragon, the winds coming from the west, were really shifty and oscillated at the first race from 8 to 14 knots and in the second race 7 to 12 knots, becoming more patchy at the third race to end with 5 to 10 knots with some holes. In general, the left side was favorable, but all other options ended valid except for team veteran local sailor GER 282 sailed by Daniel Diesing, Stefan Peuker and Heinrich Schoop who leading the second race were greedy and managed to ground the boat at the right side of the course, this ended into a 6 place.

Team GER 308 leaded by Karl Haist with Irene Haist and Martin Zeileis were the ones that had the best average for the first day inclusive winning a race two, the one leaded by USA 853 with Matias Collins, Andreas Baumueller and Stefan Strauch but they decided to round a different offset, one channel buoy pretty much alike the offset but set about 70 mts more upwind than the racing one…anyway this race ended ok after a nice recovery in a second place.

At the first race it was GER 311 with Bjorn Geisler with Sven Domges and Olyvier Syring the ones to win, while taking a full left tack after the first start, finding the extreme nice pressure and lift to round first and lead all the way ahead the local team GER 323 Matthias Dulce, Klaus Gaede and Eberhard Franke.

The last race when winds were already fading away from the lake, GER 11 sailing with a borrowed mainsail 1323 class president Michael Dietzel with Jorg Sonntag and Brigit Schroeder to win from the begging of the first windward mark, followed vlose by GER 282, GER 308 and USA 853 this last one with a series of moves on the last downwind where the wind was going crazy manage to make a foto finish with GER 308 the “windsniffer“ beating by not more than 30cm .

The day in the water ended but then at the WSaW the Bavarian party started, sponsored by Dr. Matthias Dulce and family and with special beer brought from Bavaria by Karl Haist, one with 65% of Alcohol, a sweeter taste that kept flowing after a late Weiss wurst served and some leberkase and fried chicken . After dinner many kept drining and chatting at the nice club installations and bar. The later ones to go to sleep around 2am.

On Saturday three races are schedule, but winds looks much lighter than on Friday, it will be a typical Wannsee day?