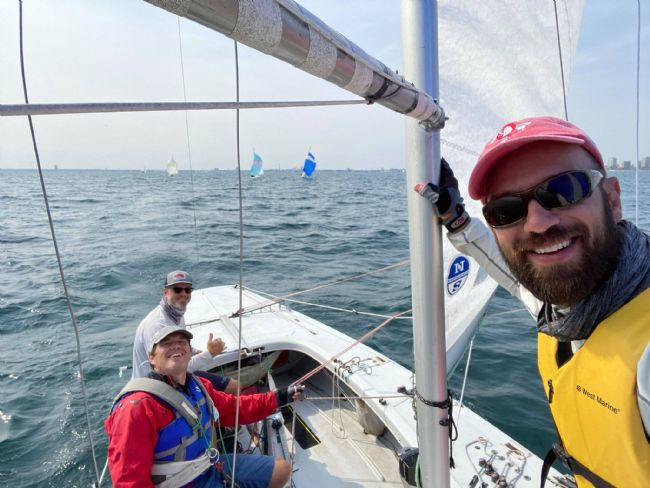 Glorious Soling day! Champagne conditions. Steady 12-15 knots form the southwest yet a range of 75 degrees. The comfy confines of the Milwaukee Bay provided both big air and flat water for 9 teams to enjoy. Race Committee - or is that Race Bots? - completed three, three lap one mile leg championship courses in bang bang fashion. The Milwaukee Soling fleet embraced the future with robotic markset bots for the starting pin, leeward gate, and windward mark. Led by Russ Sobotta with assistance from John Strassman from Milwaukee Yacht Club and Rich Riechelsdorf from Sheboygan and John Archibald of South Shore Yacht Club and other treasured volunteers who have helped the Soling class over the years the robots worked well. Courses were changed and the gate squared with seeming ease by the highly visible yellow marks.

Race One began with a cluster of boats at the pin end on a 240 degree course. The starting line was short which guaranteed a second row of boats with lots of pre race action. Most boats stayed on starboard in 2-3 foot waves with a cross swell that let you surf upwind. CAN225 won the windward mark and built on its lead to win the race. The real action was second through fifth places. Trading tacks, gybes, and places the fleet enjoyed a well contested first race.

Race Two began with a bang. The wind was building with a course set slightly to the left at 230 degrees. Big puffs put a premium on hiking, shifting gears, and reading the wind. CAN225 and CAN226 (Tom Elliott) did a remarkable job. But it was USA824 who finished second with USA845 in third.

Race Three began with a bang. A steady southwest 12-15 knot shifting warm wind held fast throughout. Again terrific conditions to try different settings given the combination of wind and wave sets. Stronger wind on the left side paid off for those who committed to sail in it. The shifts of the wind allowed for those behind to pass and remain in contention. On the final downwind leg a strong 25 knot gust of air along with a 20 degree shift to the right caused a few leading boats to round up and lose speed. Some then chose to lower their spinnakers to avoid potential damage while others waited for the gust to pass with a luffing spinnaker. CAN225 took a third bullet with CAN226 in second followed by USA845.

Day two will bring more action. With a three point spread from second to fourth place, a tie for fifth and sixth, and a close range for seventh through ninth, competition is fierce and "moving day" will be upon us. Will the robots be ready?