A beautiful day at the Zipfer Trophy

A beautiful day at the Zipfer Trophy 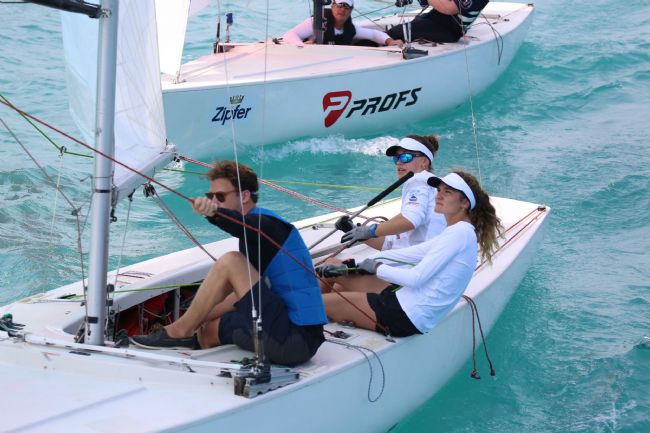 The morning with clear skies received sailors at 10:00 am for Leberkäse as breakfast, many started with the beer as well, around 11:00 the breeze from the Northeast started to fill in and the race committee gave the thumbs up. The fleet left the UYCAs in search for some race.

The first start in false with general recall as too many were anxious to race, a good sign these days. The second attempt it was with an “U” flag, the sailors were way more careful then.

The boats who went to the left had something extra on those who tacked to the right early, but nevertheless it was a crowded rounding at the windward mark, with some big gains from some teams.
The second beat was not into the left, but again AUT 100 local team with Christian Spießberger, Bruce Karl and Gerhard Schlipfinger nailed to sail into a great lead in the 6 to 9 knots of wind winning the first bullet of the day. They were followed by also another local team AUT 7 with Florian Felzmann, Michael Felzmann and Stephan Beurle and in third came UKR 46 with Dimitry Yarovoy, Roman Marcheko and Didyk Yevhenil.

The second race started with a bit more wind in-between ranges of 6 and 10 knots, more steady this time the right side was a better one AUT 7 did a great job and took the lead early, and they were followed by AUT 139 with Andreas Baslchke, Hannes Blaschke and Reino Risch, in third came class vice president CAN 225 Peter Hall, Leopold Berner and Peter Farbowski, but later they were DSQ in a protest .

The wind again faded a bit ranging from 5 to 7 knots but a third race was started and the clear side was on right side, team HUN 1 with Sandor Varjas, Laszlo Kovasci and Gabor Meretei took the lead and defended all the way from CAN 225 and in third came team AUT 86 with Alexander Wiesinger, Weis Philipp and Ekkehart Steinhuber, a great finish for the new aluminum mast produce in Italy by Licospars, a faithful copy of the Abbott mast.

Since weather was fantastic and the wind kept constant around 5 to 8 knots a 4th race was started where again the right side paid off putting HUN 1 in a great position to lead from the windward mark and AUT 7 to follow, GER 308 the “windsniffer” chose the right gate and went to the left side in the last upwind to find a nice wind “via” and round in third from behind.

At 1900hs the sailors were received at the UYCAs for the Zipfer dinner and also the video show produced by Irene Weidermann & Gert Schmidleitner made with drones around the racing course, we hope soon have some short footage to post it also here. 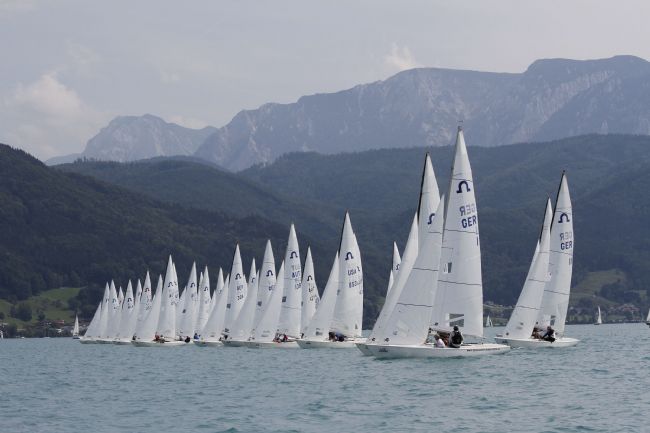 The start at the Zipfer
@Ines Wiedermann 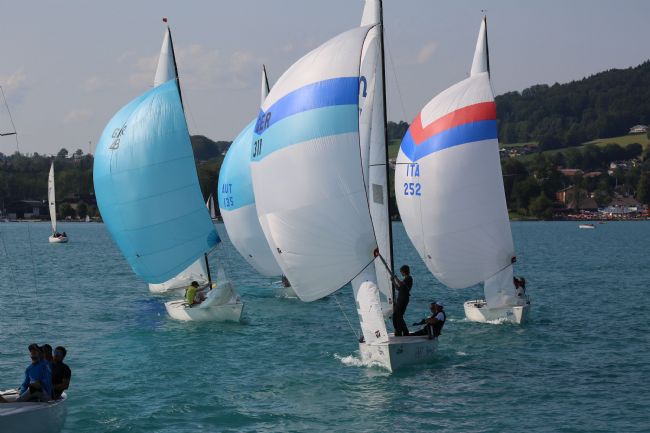 The boats finishing at the mini reach
@Ines Wiedermann