Coffee with an Old Soling Friend

Coffee with an Old Soling Friend 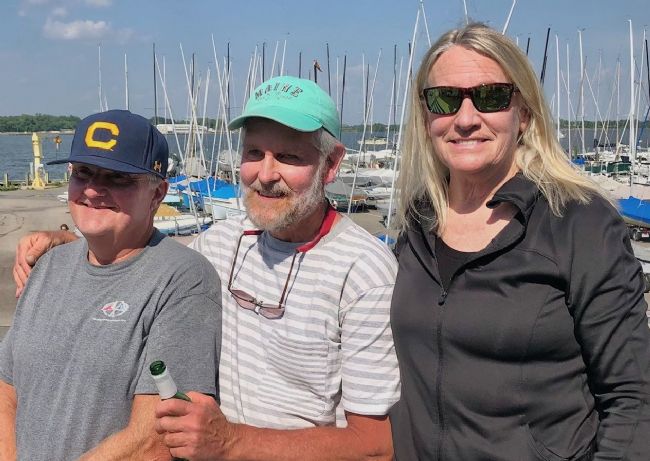 USA 857 Yakutis, Trevelyan and Campia winners at the Spring series

Two years ago in May 2019, I met Eddie Trevelyan in Annapolis for coffee to catch up. It had been about 35 years since we last spoke in person. Needless to say, the hour and a half flashed by as we remembered old times and we planned to get together again soon at some point.

Later that summer, in July, I was contemplating a purchase of a Soling and asked Eddie if he would take a look at some photos that Canadian Manfred Kanter had sent to me. Eddie was impressed with the quality of the deck layout and the condition of the hull. Manfred had completely rebuilt this vintage Soling as a father/daughter project and she was beautiful!

I ended up buying the Soling and raced her in August in the 2019 Soling North Americans in Kingston, Ontario with SSA members, Henry Thomas and Joe Hildago. We did not finish well as this was the first time we had raced together but that did not matter to me. I was back on the starting line on a Soling, my happy place!

I returned to Annapolis from Kingston later that month and parked the boat at SSA. Eddie stopped by one day to take a look at USA 857 and really enjoyed what he saw, a competitive vintage Soling that still had some life left in her.

We started talking about maybe sailing sometime. I casually mentioned that we had an NA's coming up in the spring of 2020 and that it should be a fun regatta. I think it was then that Eddie's wheels began turning in his head.

He contacted me a week later and said that he and his friend Justin McCarthy would be interested in crewing in the North American's on what is now Meltemi, my beautiful Soling!

Alas, the covid storm hit hard in March, making the prospect of holding the NA's in April 2020 impossible since everything, everywhere was shut down! Now it is scheduled for October 27-31, 2021, and, perhaps there is a slim chance to have one of the boys of '84 crew on USA 857 and put her through her paces in a large regatta. :+)
In the meantime, a wonderful weekend was spent racing in the SSA Soling Spring Series, on May 22-23, 2021 with Eddie and his cousin, Alex Yakutis crewing for me.

Eddie has shared a few comments about the regatta below. He clearly had fun jumping back into the Soling after the more than 3 decades-long break from winning Olympic Gold in LA, as middleman for Robbie Haines and with bowman, Rod Davis in 1984.