Great weekend for the Soling Class

Great weekend for the Soling Class

At the Rio de la Plata, the brown waters received the cold front, and the event was held on Saturday with a South West of 14 to 18 knots and on Sunday a South of 8 to 13knots. Both winds oscillating and changing intensity frequently. The finishes had ups and downs, and team ARG 37 with Alejandro Chometowski, Hugo Longarela and Hector Longarela had a great weekend finishing with 9 points, achieving two bullets and all races at the top 3 despite the difficult winds. They were close followed with 20 points by ARG 32 with Gustavo Warburg, Hernan Celedoni and Diego Weppler who had one bullet two more races at the top 3 and a race to forget. In third it came USA 853 with Matias Collins, Andres Ezcurra (Matias Roldan) and Alex Hasenclever who except for a 7th place, all others where top 5 finishes obtaining 24 points, enough to beat 4th place ARG 38 with the return of Flaco Nottebohm, Pablo Araujo and Lucas Tumulty with 25 points and a bullet.

This weekend proves, that the Soling class in Argentina can't overlap with other multi classes event, since all sailors end up having to decide where to compete, as often these sailors are recruited in all other classes.

At the Embalse, the preparations for the Europeans are in full motion, a great attendance to honor Adrian Dupuy, former president of the RCNM who recently died due to COVID complications. The winner of the event was ESP 34 with Jaime Alonso Allende, Julio Soria and Tomas Peuvrel, achieving 8 points and all top 3 finishes including two bullets. They were followed by ESP 146 with 11 points sailed by Carlos Elosegui, Cuco Gomez Arisqueta and Juan Ramon Jimenez who had also two bullets and all top 5 finishes except that at one race in an incident they retired from the race. The podium was completed by ESP 247 with David Peralta, Vicente Morera and Alberto Prado with 16 points and despite an 8th all other finishes top 5.

The Spanish fleet will host their Spanish Open Trophy from May 7 to 9 as final preparation for the Europeans ( www.solingeuropeans.com ) to be held in Santander next June where the Spanish sailors expect the visits from France, Netherlands, Italy, Hungarians and Germans, besides attempts from the CAN and USA, it won't be a big fleet mainly due to covid consequences but for sure it will boost the Soling fleet at the west region of Europe in special at the Iberic penisula. 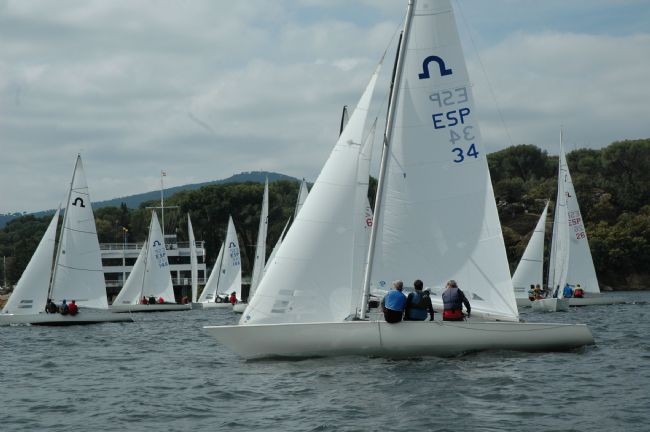 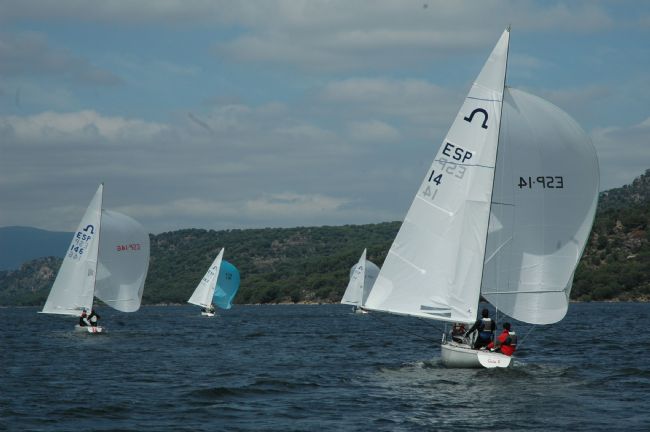 Downwind at the Embalse
@ Ignoto 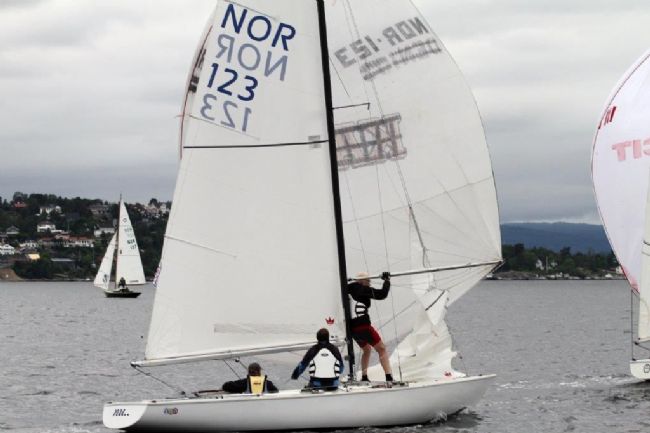 The start at the Embalse in Madrid
@Ignoto