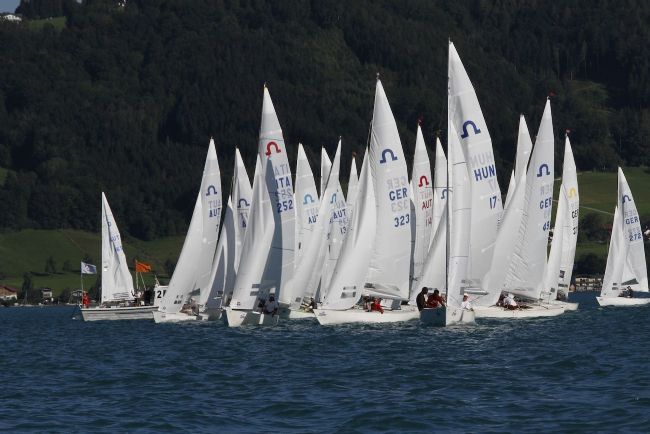 The crowded start at the RC
@UYCAs

Despite COVID 19 hacked the world since early 2020 and continues to affect life everywhere, the UYCAs at lake Attersee managed to put what would look like the only big Soling regatta of the year.

The ISA officially cancelled the titles in dispute (continentals and worlds) but the Austrians with determination, despite initially they highly suffered the disease outbreak after a snow party, have now at the lake 30 teams from 4 nations, contesting the traditional Zipfer Trophy, which also is being the Austrian Championship and Hungarian Championship.
Many teams had to dropout since the event was confirmed, travel restrictions, the fear for the infection, and economical downside of the situation just prevented the event for being probably one of the few events to reach over 40 boats in the class.

The first day with great sun, light winds, the Hungarian team HUN 1 with Sandor Varjas, Laszlo Kovacsi and Gabor Meretei despite not winning any of the three races sailed scored the best average with a 2,5,2 going back to shore and celebrate with beer a 3 points lead over Proofs team AUT 114 with Chritian Binder, Christian Feichtinger and Klaus Kratochwill who also did not won any race and marked a score 6,2,4 , Local team in preparation for the 2022 Europeans to be held at lake Attersee team AUT 7 with Florian Felzmann, Michael Felzmann and Stephan Beurle were third overall after the first day winning the first race then finishing third and 10th.

AUT 117 with Michael Farthofer, Lisa Farthofer and Rudolf Matheis also won a race , the second of the day and their great sailing put the new team names at the top five in the competition.

Overall fifth also did not won any race but scored enough to be in there fighting for the final beer keg, GER 308 with Burschi Haist, Martin Zeileis and Irene Haist.
Team Blaschke AUT 139 with Andreas and Hannes + Reino Risch was the other team to win a race and follow close the top pack.

Tomorrow more races are scheduled, and the good weather will continue, promising better winds for Saturday. 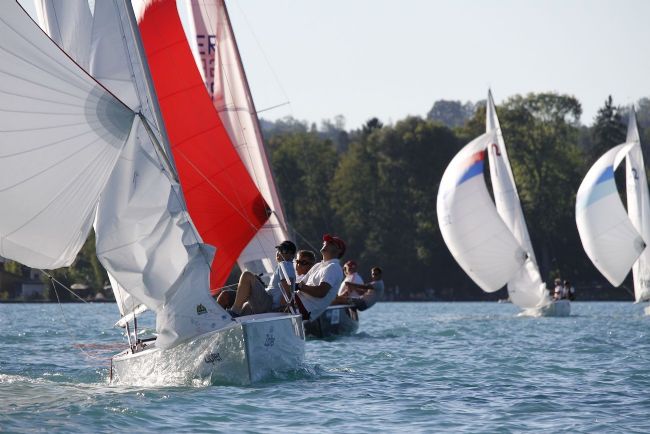 fun reaching to the finish
@UYCAs