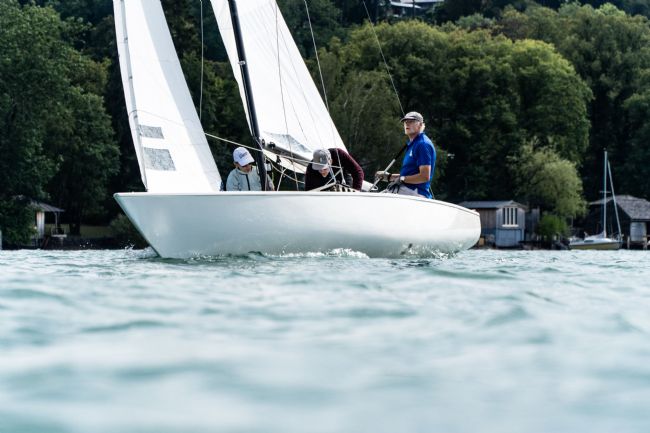 On the first weekend in August, 8 teams met at the Bayerischen Yacht Club in Starnberg to sail under the direction of Professor Dr. Eberhard Fischer-Brandies the Erich-Hirt-Preis, the oldest and as well the first German Soling regatta after the COVID-19 easing.

On Friday, despite the hot weather, a shortened race could be sailed in a dying south wind. The following obligatory BBQ, "sponsored in kind" by Thomas Scherer, Andi Baumüller, Gerd Auerswald, Burschi and Irene Haist, was a great success, not least due to a mild, almost full moon summer night.

On Saturday searing heat and hardly any prospect of sailing, but then 3 shortened west wind races could be sailed. In the evening dinner followed in the sacred halls of BYC on the 1st floor of the casino with a wonderful view of the stormy weather on the lake. The fact that a former BYC president serves the food and acts as a prudent "head waiter" may surprise many, but it made this evening - with an excellent menu - even more glamorous!

On Sunday the weather changed, but the 5th race, which allowed a discard, could be completed in a rainy south-westerly wind - shortly before the finish after 2 laps not dying but dead.

Many thanks to everyone involved on land and water that this traditional event - as one of the few this year - was able to take place despite all the adverse circumstances.