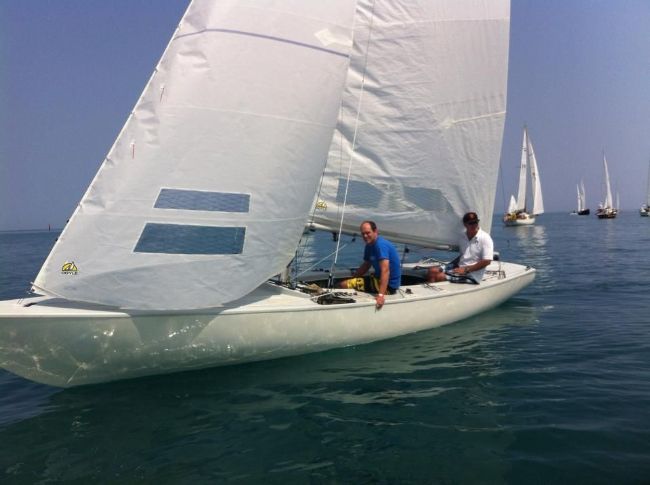 While Covid seems to have altered every tradition, circumstances allowed Race Weekend to be held this year. Five boats competed with the Dave Baum and Dave Crysdale traveling from Milwaukee.

Friday races had winds 6 to 10 out of the NE with left over 4' rollers. Racing was notable because of non-forced errors. Race 1 had the fleet asleep as they bore off on a run directly toward the off-limits starting area. Race 2 had two leaders way out in front who somehow forgot that a ‘shorten course' flag was up at the start. Race 3 had some participants starting at the 1-minute gun for whatever reason. All of this confusion allowed Kennedy to cross the finish first each race.

Saturday was dominated by light winds allowing for one race. After 2+ hours of scratching for every little advantage, Kennedy was coming from behind and driving through Crysdale's lee, but the “bang – bang” of the gun gave Dave the win. Sunday had flat water and 5-8 winds. The first race had another win for Dave with Tom Elliott coming in a close 2nd. The last race of the day had a downwind finish with Dave Crysdale somehow evading Kennedy's attempt to put a spinnaker wind block on as they approached the finish.

Nice to see the action in Wilmette