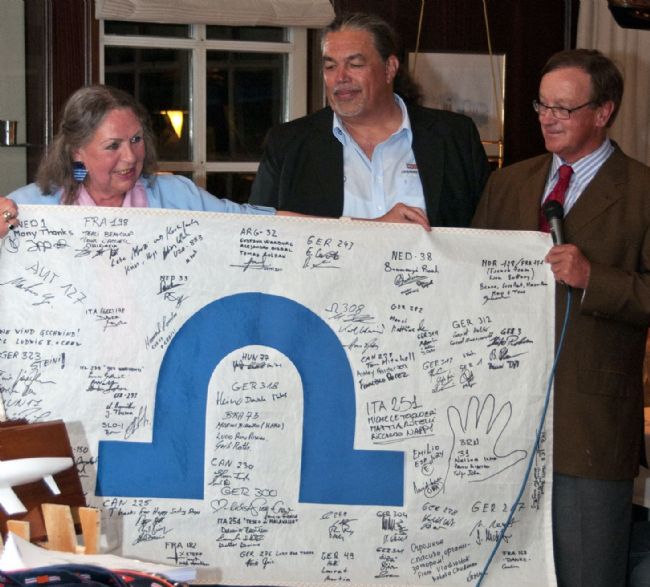 Mauzi at the 2011 Worlds receiving from Peter Hall winner (2011) and Roman Koch Championship Chair (2011) the class flag signed by all competitors.

After a short serious illness, the well known `Soling-mama` Mauzi fell asleep peacefully on April 20th at the age of 84 and is finally together again with her beloved husband Max, who died 2015.

She left a daughter Heike twin with son Maxl, and Roman amongst many grandchildren (Katharina, Lisa, Carolina, Mariella, Maxy, Mona & Valentin) and great grandchildren (Jaron, Viktoria and Emilian), which some also enjoy sailing the Soling like Maxl and Roman have done and continue to do like their father did. The Koch family was well known not only for the good sailing but also for believing in the Soling as a true life passion and family bonding.

Together with Max Koch Sr. in 1973 they started the first Omega Cup event which is still an active event held each year at the Chiemsee Yacht Club with superb organization and well known about her liqueurs & goodies giveaways and the Bacardi party.

She was fully in charge of the 1990 European Championship held at Chiemsee with 123 registrations (but according to IYRU, only 90 Solings were allowed to start).

Again her participation was intense at the 2011 World Championship held at Lake Chiemsee, which is still a benchmark with excellent organization, great events and amazingly great wind conditions and one of the biggest fleets post Olympic times.

She would have loved to personally look after the 2021 World Championship once again, but now she will send us the best winds and weather from the very top of the Lake Chiemsee ...

Mauzi, you have had a full life with your sailors, keep sailing with right of way up there. The fleet at the Worlds 2011 at Chiemsee. Mauzi always against being in picture shot !!!at the Worlds in Chiemsee 2011