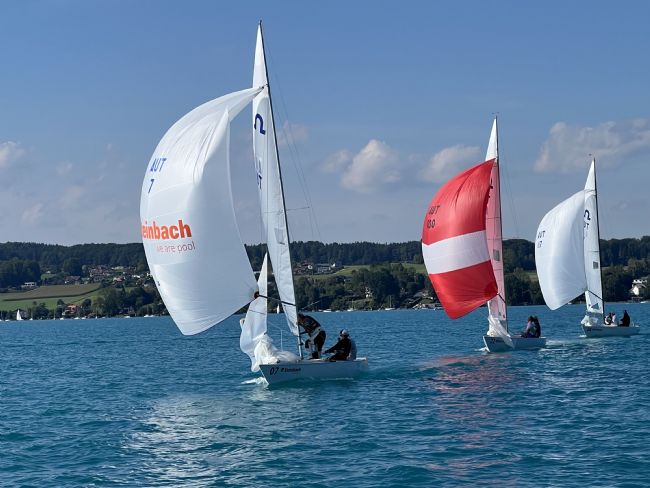 Schonen tag !! beautiful day, but still not champagne sailing, it was light, puffy, shifty very difficult for the sailors, but Gert Schmidleitner completed three races, the two firsts full length and the last one shortened at the gate (by one lap).
The wind never were beyond 11 knots but at times it went below 4 knots in some hole spots, it came a bit from the North, something from the Northeast and from Northwest, a nightmare to choose sides, starting area, etc. Mainly it was the right side, which was always better, there were always a client to choose the left and sometimes it did paid off… it didn't paid off when this writer chose it at the last race…

The first race the starting at the race committee was crowded, the first attempt a general recal, everyone had too much will to start sailing… Umpierre flag was hoisted…but again the adrenalin didn't left the sailors body.. a new general recall… then black flag was up (the first black flag in many years… well everyone behaved this time.
Despite starting late AUT 100 with Spiessberger, Reisinger and Schlipfinger, tacked to the right and found the path to lead the race and win it. HUN 1 with Varjas, Kovasci and Meretei finished second and the local sailors from AUT 400 who just restored a boat Klinger, Gilhofer and Lux finished third.

The second race was similar, but those who went to the right had a key moment of 2 to 5 min in which a gust came in and it required to tack to the left… those who didn't do it from the front row fell back quickly. This race HUN 1 did a great job winning it followed by the Steinbach team AUT 7 with Felzmann, Beurle and Felzmann and in third AUT 100.

The Third race already started with light winds, HUN 1 with superior speed a great start won the race followed by the windsniffer GER 308 with Haist, Zeileis and Haist recent winners at the Zipfer Trophy. In third came the Berliner team GER 323 with Dulce, Franke and reinforcement by the beauty Schaaff.

The after race had beer and then teams got dressed to have a cocktail in the Litzlberger Island and then a nice buffet with live music (.

Tomorrow starts are scheduled for 1100, do not forget to collect your Trac Trac device before going to the water, and spectators can follow the race through it at: https://tractrac.com/event-page/event_20220827_SolingEuro/2295 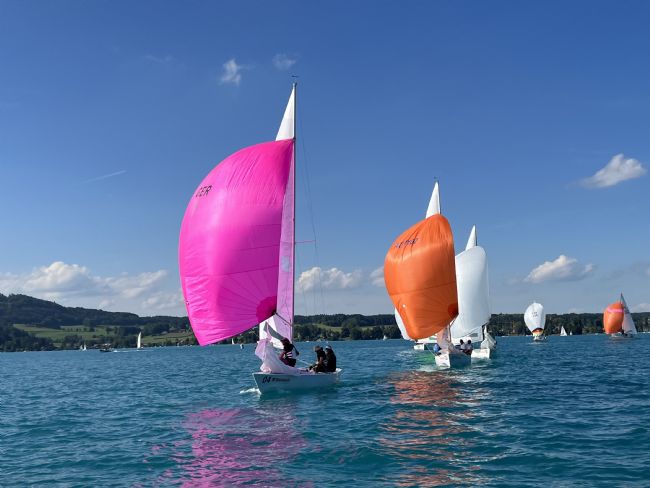 The way to the finish, the new Liebner Soling GER 1
@Monika Kimmeswenger 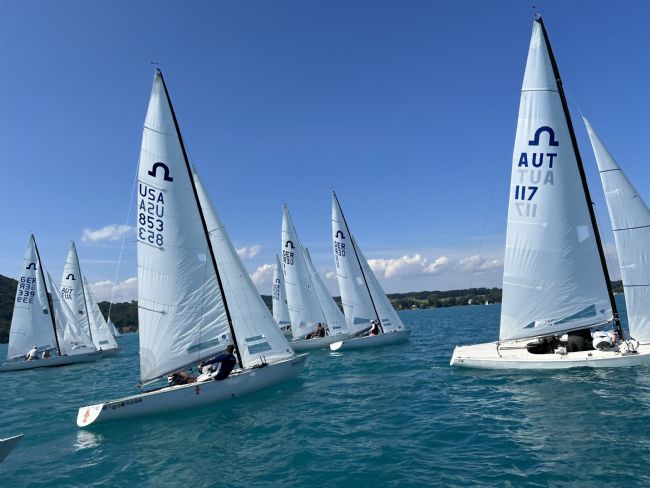 The crowded end at the race committee start
@ Monika Kimmeswenger