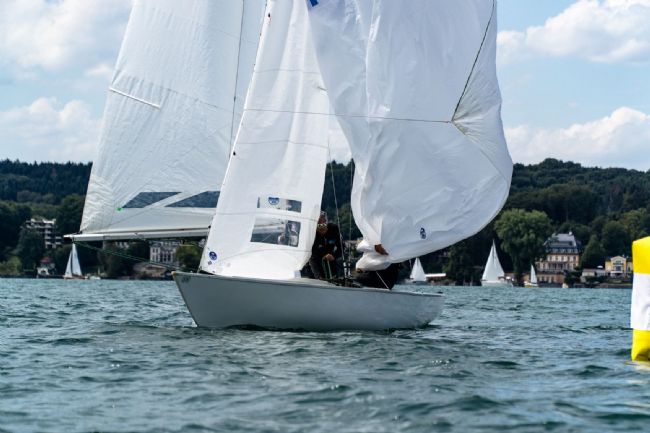 rounding the mark at the 2018 Erich Hirt Preis
@BYC

Despite a great attendance, a fabulous class BBQ, and a lightning show, the weather was not sailing friendly at Starnberg for the Erich Hirt preis this past weekend.

The first day on Friday with no winds, sailors waited the whole day for an opportunity to race, and the only race seen was the rush to the grill, where no one wanted to miss the Nuremberger sausages, the summer party besides the old traditional building at the Bayersiche Yacht club kept going with the usual drinks, lots of beer, and delicatessen Kaiserschramm offered by the Austrian visitors.

On Saturday the winds where light and shifty, it allowed just one race, and the Nuremberger cooks GER 318 Thomas Scherer, Andi Baumüller and Stefan Strauch received their dividends, winning the race, followed by GER 311 with Bjorn Geisler, Sven Domges and Sascha Leck and in third the team from the Netherlands NED 33 with Rudy den Outer, Theo de Lange and Bram Soethoudt.
During Saturday a dinner offered by the BYC had the following at the menu: Couscous salad, Boiled beef with mashed potatoes and Mascapone cream with fruit. Sailors were hoping for a better Sunday although the weather forecast was inducing a wet packing after sailing if any sailing would happen.

Sunday was much colder than the other days, around 15 Celcius, with little rain in the morning, but as expected no wind at all, at 1300hs the RO Eberhard Fischer-Brandies called the day off. Having a winner GER 318 Tomas Scherer, Andreas Baumueller and Stefan Strauch but not being awarded with the chance to engrave their names at the Eirch Hirt Preis perpetual trophy.

GER 311 with Bjorn, Sven and Sascha finished second and ahead team NED 33 with Rudy, Theo and Bram which after 15hs drive got the chance to sail one race, but on Sudnay despite the frustration, they went out under the little rain, no wind, for some practicing, they were the last ones to pack the boat around 17hs and will face now another 15hs drive back home.

The next event in Europe will be at La Baule, France and after that it comes back to Austria, the traditional Zipfer Trophy which already have 28 entries from 6 countries and 2 continents.