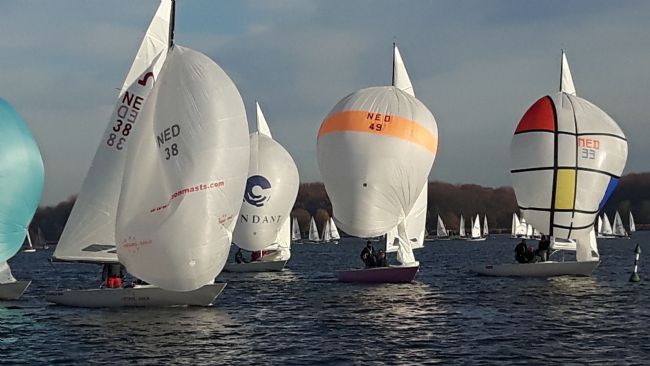 Approaching the mark at the boterletter 2019
@Hans van Gent

The Boterletter, held on the 30th of November and 1st of December, is a race that I have sailed many times, but not in the Soling. During the worlds in La Baule, the idea was born to participate alongside the bigger boats. Thanks to the help of Han van Veen and Bram Soethoudt, we were able to track down a Soling to lend for the weekend. This proved to be more challenging than anticipated, but after a couple tries a boat was found.

The boat, however, had not been racing in a couple of years and needed some proper servicing. The boat was not properly set up for droop hiking, which we thought necessary as the wind forecast had initially been 10-15kts on Sunday. After some creativity, the boat was prepped and we quickly went out to test. The boat sailed perfectly upwind, but as we pulled the pole uphaul a large chunk of hay came out of the mast: birds had presumably chosen to nest inside. But the problem was quickly resolved after a couple of hoists and the hay was out.

With a boat prepped to race, we came in early on the Saturday to get used to the boat. My helmsman, Martijn Walrave, and bowman Andreas Zwanenburg both had no previous Soling experience. Unfortunately, the wind did not pick up on the Saturday and we were not able to train nor race. The advantage of the Soling in comparison to our usual dinghies quickly became evident: the dry and spacious Soling was perfect for camping out on the middle of the lake and playing loud music over our speaker while enjoying our sandwiches. Eventually racing was abandoned and we returned to the shore to pack up.

That evening, the Dutch Soling Association had planned a meal as a conclusion of the 2019 season. It was very good to see the familiar faces from the Europeans and Worlds that were unable to sail this weekend. The Dutch Soling family was very kind and warm to my crew, who both were complete strangers to them. Their openness and enthusiasm towards new (young) sailors is one of the things I like most about the class. It also proved to be an excellent opportunity to discuss some trimming questions that we still had. All in all, we left the meal stuffed and with new insights to hopefully perform well the next day.

Sunday proved to be a better day: as we arrived at the club, the flags were fluttering in the wind. After slipping and sliding over the marina towards our boat (it was still freezing when we arrived), we quickly removed the ice and set out onto the water. The first race looked very promising for us until Stijn Kruijt of the NED 44 shouted that we were headed for the wrong top mark. After this we managed to claw a bit back, but were being caught up to left right and centre. While we were losing at least one place each downwind, the GER 243 managed to pull away from the rest of the fleet and finish well ahead. During the lunch, Rudy den Outer gave us the key to our lacking speed: we had not been pulling the mast far enough forward. The wind was too light to just let go of the backstay, and we had to pull the mast down with the forestay. Combining this with dropping the jib would ultimately give us more pace in the second race.

The second start was heavy pin, and the NED 33 (Rudy den Outer, Theo de Lange and Thies Bosch) and NED 49 (Han van Veen, Nickel Koch and Julian Hofman) were quick to take advantage of that, giving them a 50m+ lead from the start. After the top mark, the top 5 were all within 20 meters of each other, followed by a large gap to the sixth boat. Despite our great efforts to keep in contact with the 4 boats in front of us, their experience and knowledge of the Lake's ever-changing winds allowed them to pull away from us. It was also not long until the back markers caught up with us. The youngsters of the NED 44 (Nynke Verwoerd, Kai Spruijt, Stijn Kruijt) and the GER 243 were hot on our heels right up until the finish line, but a fortunate shift allowed us to stay ahead of the both of them. The race was won by the NED 33, although I must admit that I did not see much of that during my struggle to keep the spinnaker filled.

Congratulations to NED 33 for winning the event, closing the Soling racing season in the Netherlands. Wishing all fellow sailors happy holidays and looking forward to be able to participate in more Soling races next year!
Complete Results 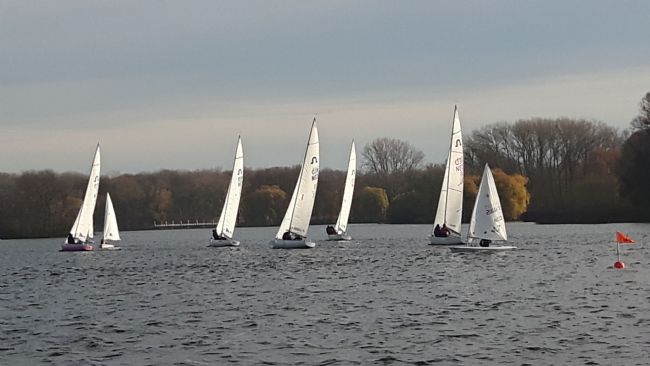 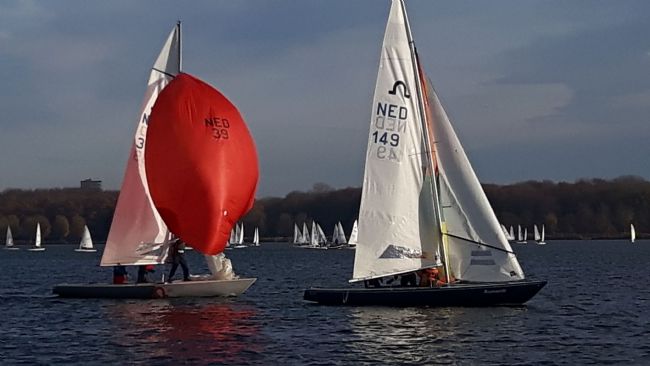 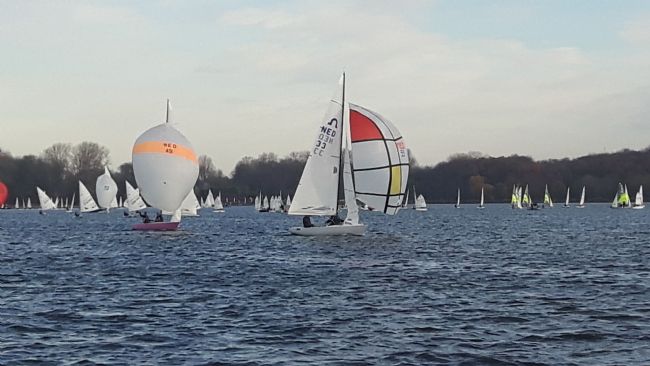